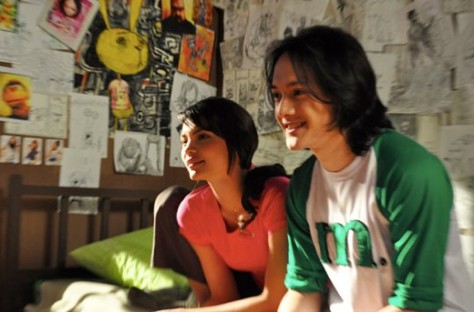 For the first time in years, change has come to the Metro Manila Film Festival (MMFF) with its new and refreshing lineup of eight Indie films (Independent films) that controversially toppled its mainstream counterparts as official entries to this annual competition.

Much to the delight of moviegoers, who have long complained about typical Pinoy films becoming all about hitting blockbuster merits at the expense of quality storylines, these new entries are offering a crisper and truer taste to Philippine pictures.

Among these, Saving Sally is getting the attention for its exceptional Pinoy 2D animation combined with all too real footages and familiar youth predicaments.

Set in 2D animated Metro Manila, this is a story of girl inventor Sally, played by actress Rhian Ramos and geek comic book artist Marty played by Enzo Marcos, who developed a friendship over their love for art and tinkering. Both have needed each other’s company perhaps due to the girl’s secret but palpable troubles at home and the boy’s struggles to overcome bullies and become a published artist; as he weathers unrequited love.

In its first week of showing, the film’s fresh tang yielded divided comments with half of social media users complaining about its poor audio quality, typical storyline, and premature ending; while the other half is proudly approving its world-class artistry and manner of presentation.

To appreciate Saving Sally, one must consider that first; it’s an Indie film, shot in just a small studio space with a low budget and second, it’s intended by its creators initially for their friends’ and families’ consumption. You can say that it is a real blessing to have it come this far. Having this knowledge may explain the lack of technical perfection, albeit creativity and visual flair, are not lost.

This gives Indie film partisans a space to let some things pass such as voice quality or poor acting by new casts. As an avid moviegoer myself, I allowed myself to transcend over these little concerns so that it won’t interfere with my enjoyment of the film.

Instead, I focused on a world-class cinematography, color, and animation that, quite frankly, saved this movie with a couple more stars in rating. Despite its alleged low budget, the animation quenches the thirst of Pinoys for expensively-tasting production. If anything, this movie proves na kaya naman pala nating makipagsabayan sa Pixar. Char!

The English language used in the dialogues, I admit, felt a little off at the beginning, where I found myself thinking that they should’ve stuck with the vernacular. I mean having actors speak English while wearing their slippers and riding the jeep isn’t something I’d wish for in a Tagalog flick.. BUT I gave it a chance, and it worked! Even for Marty’s mom and dad.

Besides, the title’s already in English so don’t expect it to veer away from that path. It’s cute to see Rhian Ramos deliver the lines like a true blue Hollywood film actress would. Also, can I just say, that this is the first time I watched Rhian on screen and because of her damsel face and geeky quirks I think I am starting to become a fan.

Because of the film’s current standing as an MMFF entry, it is unable to dodge criticisms. Some of its weaknesses may sometimes be mistaken for being a trying-hard film aka pretentious. But with a quality delivery and unique style, everything seems to be straight simple and “out there” with no need to filter. Except for the animators’ method of course.

For me, the film is rather, more ambitious. Reflective of a genius local filmmaker’s plot to showcase world-class talent that has long been encased and now hungry for success.

Worth every clap I gave it during the ending credits at the movie house!